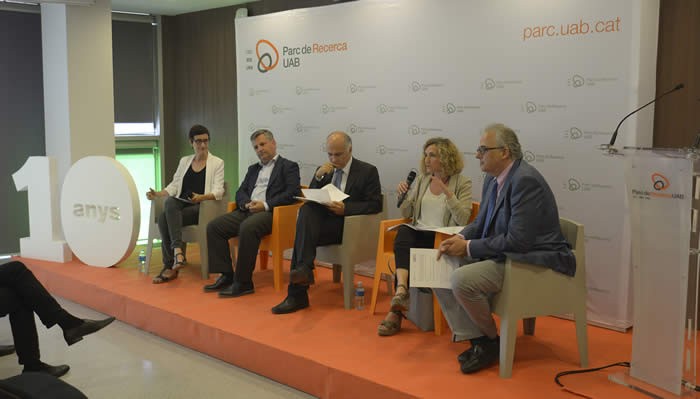 Last Friday, May 26, the UAB Research Park celebrated its tenth anniversary with a day of debate on the future of science parks and their role in the knowledge economy.

The UAB Research Park brought together more than 200 people in the commemoration of the 10 years of its creation. The event summoned researchers, entrepreneurs, responsible for the departments and the research centers and institutes of the campus of the UAB, as well as representatives of institutions of the territory and companies linked to the Park.

The opening ceremony was attended by the highest representatives of the three institutions that make up the Park: the president of the Board of Trustees and director of the Autonomous University of Barcelona (UAB), Margarita Arboix; The president of the Higher Council of Scientific Research (CSIC), Emilio Lora-Tamayo and the general director of the Institute of Research and Technology Agroalimentarias (IRTA), Josep Maria Monfort. All of them have put in value the task developed by the UAB Research Park during these ten years to strengthen the relations between research and the business fabric.

"In this decade we have created a true innovative and enterprising ecosystem in our territory. Now, the challenge is to increase the social and economic impact of knowledge transfer activities taking place on campus, "said Margarita Arboix," We must work to open new paths to the challenges of science and technology, and Collaborate with researchers and companies to respond to society on issues of great importance, such as aging, poverty or the environment, "he said.

Emilio Lora-Tamayo described PRUAB as a "strategy of the first order" to deal with the changes that are occurring in the generation of knowledge. "In a process of political and social transformation on a global scale, with an increasingly competitive science model, we must seek strategies and alliances, establish synergies and use resources for international projects," he said, congratulating himself on UAB and IRTA to be "more present in this new world".

Josep Maria Monfort reminded the people who made possible the creation of the Park, indicating that time has shown that it was "an idea of ​​success" and was convinced of the promising future that lies ahead.

The day also included a roundtable discussion on the future of science parks and their role in the knowledge economy, moderated by the director of PRUAB and Vice-rector of Innovation and Strategic Projects of the UAB, Javier Lafuente, and who had the president Of the IASP, Josep Miquel Piqué; The director of Business Innovation of ACCIÓ, Mariona Sanz; The founder of the company Fuelium, Neus Sabaté, and the director of Scytl, Pere Vallès.

As a tool in the service of transferring knowledge and technology between the academic and research world and the company, PRUAB has contributed to the promotion of numerous entrepreneurial projects arising from the research activity of the UAB campus. Since its creation in 2007, it has supported more than 300 entrepreneurial projects and has promoted the creation of 92 companies, with a success rate of more than 80%. These companies have generated 850 new jobs, of which 25% correspond to highly qualified profiles, and invoice around 50 million euros annually.

Only in 2016, six new companies were created, including Bioeclosion, promoted by researchers from the Department of Chemistry and the Institute of Biotechnology and Biomedicine of the UAB to commercialize a biosensor capable of detecting celiac disease in a few minutes from a drop Of blood, or FutureSiSens, created by researchers of the UAB and the Institute of Microelectronics of Barcelona (IMB CNM - CSIC) to bring to the market a thermoelectric sensor based on silicon nanotechnology, self - supplied with energy and capable of detecting respiratory problems Such as sleep apnea or pneumonia.

Among the companies in the UAB Research Park with more experience, there are also different success stories, such as Scytl, which specializes in the development of cutting-edge electronic voting technology, which currently operates in 47 countries and which closed a round of investment 12 M euros in addition to the 94 M that they obtained in 2014. O Oxolutia, born in 2010 from the Institute of Materials Science of Barcelona (ICMAB - CSIC), which puts in the market processes and materials developed in the field of Applied superconductivity with a nano-technological approach.

One of the objectives of the UAB Research Park is to detect the technological and social needs of the business community of the territory and to respond through joint projects with researchers from different disciplines. In this sense, thanks to the activity of the Parc, more than 120 R + D + i projects have been generated between campus researchers and companies, valued at 6 million euros.

A recent success story of this collaborative research is the project that PRUAB has developed with the company Dormity.com to create a personalized recommendation system for mattresses. For two years, researchers from the University Service of Research in Physiotherapy of the Gimbernat University School, the Center for Computer Vision and the Center of Prototypes and Hardware-Software Solutions of the UAB worked with the company to develop this system and today, Dormity.com has already integrated it into ten stores.

The headquarters of the UAB Research Park is the Eureka building, where during these years 48 companies have been located, among spin-offs emerging from the University, small and medium-sized companies that base their activity on research and consolidated companies interested in boosting their innovation In collaboration with the research centers and institutes of the university campus.

Eureka hosts, for example, the Advanced Technologies R & D & I Laboratory of the multinational company Henkel, the Ingredients Innovation and Technology Unit of Lucta, the R & D department in software of Zetes or the laboratory of Olfatometry of Odournet.