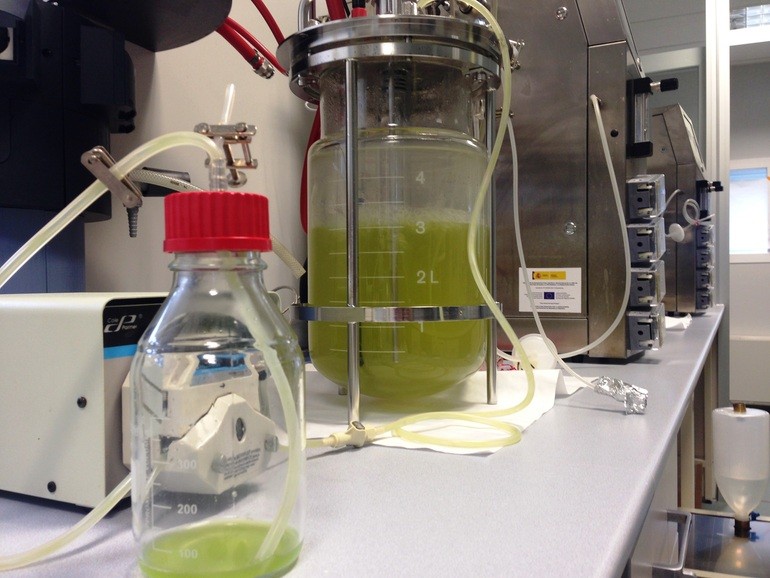 The oil produced is of good quality and can be transformed into biodiesel that meets the standards set by the law regulating the sale of biofuels.

The process to obtain the oil is part of the CYCLALG project, which aims to develop a biorefinery model around microalgae.

NEIKER-Tecnalia has developed a process for the cultivation of the microalgae Chlorella that allows to obtain more than 50% of its weight in the form of oil if grown under certain conditions. The oil generated from the microalgae stands out for its high content of oleic and palmitic acid and because it can be transformed into biodiesel that meets the standards set by the law regulating the sale of biofuels.

The key to achieving this oil lies in the growing medium used for algae growth: it is composed of more than 80% nutrients obtained from organic waste such as flaxseed, plum and corn canned remains or potato peelings. Another waste used is the algae biomass itself once defatted, which is composed mainly of protein and carbohydrates. Most notably, the use of these wastes as nutrients in the growing medium has led to a 30% increase in process productivity.

The new bio-economic strategy adopted by the European Union highlights the need to promote research into new biological resources to facilitate the diversification of existing value chains. Microalgae are an example of this type of resource.  The cultivation of these microscopic plants allows a wide range of products of economic value to be obtained, while being properly aligned with the necessary aspects of environmental sustainability.

One of the most recognized characteristics of microalgae crops is their high productivity, superior to that of any other vegetable crop. Furthermore, due to their richness in proteins, lipids and carbohydrates, microalgae are currently considered as a high value raw material for their exploitation in different economic sectors.

Its chemical composition makes microalgae a raw material (biomass) with high potential for the development of biorefineries (integrated production of food inputs, chemicals and fuels). Beyond its commercial potential, the cultivation of microalgae can be considered as an interesting way to develop new strategies for the recovery of waste that is very beneficial for the circular economy.

CYCLALG, a project to achieve biodiesel via microalgae cultivation

NEIKER-Tecnalia, a public entity of the Department of Economic Development and Infrastructures of the Basque Government, is the coordinator of CYCLALG, an R+D+i project whose objective is to develop and validate technological processes that allow for improving the economic profitability and environmental sustainability of the biodiesel production process via microalgae cultivation. The project adopts the principles of circular bio-economics and seeks to improve the value of microalgae biomass through the efficient use of resources and the extension of the useful life of waste.

The CYCLALG project is a Spain-France-Andorra territorial cooperation programme within the framework of POCTEFA 2014-2020 and, in addition to the coordinator NEIKER-Tecnalia, the following partners also participate in it: CENER-CIEMAT Foundation, Tecnalia Research & Innovation Foundation, Association of Industry of Navarra (AIN), Association Pour Lenvironment et la Securite en Aquitaine (APESA) and CATAR-CRITT Agroressources. The last periodic meeting of the project was recently held at NEIKER-Tecnalia's facilities in Arkaute.

The final objective of the project is to develop a biorefinery model around microalgae, which means exploiting the biomass of microalgae in an integral way, optimizing the flows of resources, materials and energy, and giving rise to multiple commercial products. The challenge is to obtain at least five marketable products from the Chlorella microalgae: two energy products (biodiesel and methane), an amino acid rich concentrate, a fertilizer for agricultural use and biomolecules for the cosmetics industry.